Althea Gibson was amazing. In case you didn’t know, she started out poor. In 1927 when she was born, her parents were sharecroppers on a cotton farm in South Carolina before they moved to Harlem to find economic opportunity due to the recession.

Everyone knows that Althea Gibson was a tennis pro. She started her rise in tennis by winning the women’s paddle tennis champion of New York City at age 12. In 1941, she played her first tournament at the American Tennis Association (ATA) New York State Championship. The ATA was a tennis organization for African Americans since the United States Tennis Association (USTA) only allowed white players in its tournaments at the time. After winning the ATA championship she was mentored by the “godfather” of black tennis, Dr. Robert Walter Johnson. After lobbying by ATA officials and Alice Marble (a former USTA champion), Althea Gibson was allowed to play in the USTA National Championships (now the U.S. Open) in 1950. She later went on to win 11 Grand Slam titles. 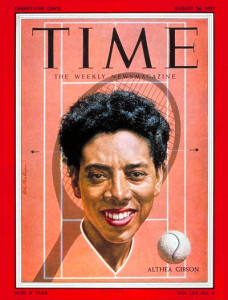 But in addition to that, she was a professional golfer and starred in a movie alongside John Wayne.

Althea Gibson became the first African American to compete in the Ladies Professional Golf Association (LPGA) tour (after retiring from tennis). She competed in the LPGA even though when she did compete, she was often forced to dress for tournaments in her car because she was banned from the clubhouse and frequently some of the country clubs refused to let her compete. Nevertheless, she played from 1964 to 1978. 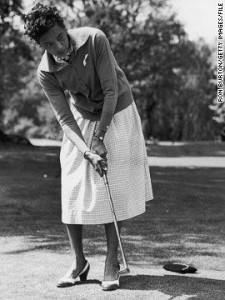 In 1959, Gibson starred in the movie The Horse Soldiers. John Wayne played the lead and Althea Gibson played an enslaved person named Lukey. Lukey’s character was written to speak in Negro dialect; Althea Gibson found this speaking style offensive and complained to the director, John Ford. Although Ford had a reputation denying the demands of his actors, he agreed to Gibson’s request. This was in the 1950s. Althea Gibson was amazing!! 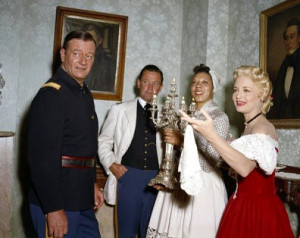