William and Ellen Craft Were Amazing

William and Ellen Craft were amazing. They were an enslaved married couple in Macon,
Georgia when they decided to escape from slavery. So in 1848 they put together a ingenious though risky plan. Ellen had very light skin and she was often mistaken for a European American. She made men’s trousers for herself and pretended to be a wealthy
European American man who was very ill. Her husband William pretended to be her enslaved helper on the train to Philadelphia. Ellen put her right arm in a sling so she would not have to sign her name, and she put bandages over the lower part of her face so she would not have to talk. She also pretended that she was hard of hearing. This caused people not to approach her with conversation. Upon reaching Philadelphia the Crafts presented themselves to the Anti-Slavery Society. This organization helped them start a new life as free people.

They eventually moved to Boston. After the passing of the Fugitive Slave Law in 1850, agents were sent to Boston by the Crafts’ former owners to capture the Crafts. Eventually this led the Crafts to move to England. In 1860, they wrote a book about their experiences: Running a Thousand Miles for Freedom.

Below are two depictions of the Crafts. The illustration is taken from the Black Holocaust Museum and the photo is taken from a historical re-enactment. 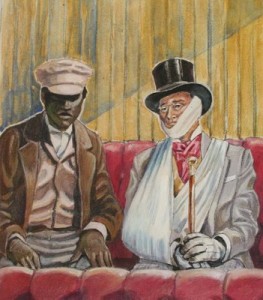